P-Jammers – An accompaniment for marches and protests

So what is P-Jammers all about? They are part of a community street band movement whose bands play not for the people but “among the people and invite them to join the fun. They are active, activist, and deeply engaged in their communities, at times alongside unions and grassroots groups in outright political protest, or in some form of community-building activity…” says the website for Honkfest (honkfest.org), an annual festival of activist bands held first in Boston then Seattle and Austin and now in many other cities.  Drawing from sources as diverse as Klezmer, Afrobeat, and Hip Hop they are “outrageous and inclusive, brass and brash, percussive and persuasive — reclaiming public space with a sound that is in your face and out of this world.”

PJAMRS, the Peace and Justice Activist Musical Rascals of Spokane, or P-Jammers Community Marching Band, was founded by Greg Youmans in response to the need for a musical accompaniment for marches and protests and o 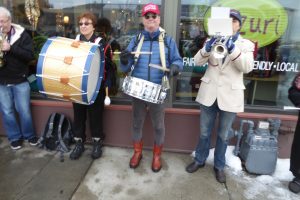 ther events where people are making themselves heard. Greg had been in Seattle’s Anti-Fascist Marching Band and participated with them in the Battle in Seattle – the enormous 1999 anti-WTO protests. After moving to Spokane and becoming active in protests here he discovered the Peace and Justice Action League. Recruiting other musicians through the PJALS newsletter he and Bill Lockwood p

ut together a band that made their debut at a September 2005 peace march. In addition they perform at events such as Earth Day and First Night.

Ready to join the fun and action? A diverse group of amateurs and professionals, young and old, P-Jammers welcomes anyone who wants to share in their musical exuberance. Practices are organized in preparation for specific events.