cana Education Program, the Office of the President and Housing and Residential Life.

In addition to her pioneering work in the explanatory theory and book, Post Traumatic Slave Syndrome, DeGruy has developed a culturally based education model for working with children and adults of color.

dealing with Cognitive Dissonance in the past

One of the topics covered was historical examples of how Founding Fathers such as Thomas Jefferson and James Madison distanced themselves from the inhumanity of slavery. They were experiencing cognitive dissonance. How did Europeans convince themselves those of African descent were a lesser class of human and therefore not deserving of freedom? Carl Von Linnaeus, the father of the field of Anthropology, in his book Systema Naturae, set forth a classification of human races using color as a criterion. “Linnaeus describes Homo Americanus as reddish, choleric, obstinate, contented, and regulated b y custom; Homo Europaeus as white, fickle, sanguine, blue-eyed, gentle and governed by laws; Homo Asiaticus as sallow grave dignified, avaricious, and ruled by opinion; and Homo Afer as black, phlegmatic, cunning, lazy, lustful, careless, and governed by caprice.” ( J. S. Haller in Outcasts From Evolution as quoted in Post Traumatic Slave Syndrome)

dealing with Cognitive Dissonance: The Statue of Liberty

Did you know that the original drawings for the design of the Statue of Liberty included a broken chain and shackles in one of her hands? The French sculptor Auguste Bartholdi wanted to refer to the 1863 emancipation of slaves in the United States. However, the U. S. government was uncomfortable with the original design and wished the chains to be removed. The sculptor insisted they rema 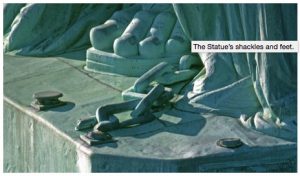 in. To see the compromise that was reached look at the chains that lie beneath her feet.Then see the viewpoint of visitors to the Statue of Liberty.  Do you think they can see the chains?  Dr. DeGruy brought this to the attention of the world and U.S. National Park Service. 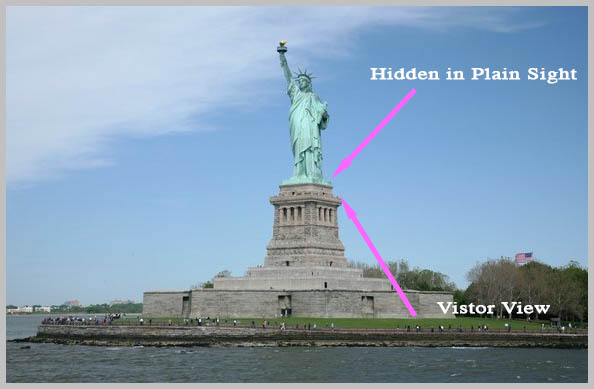 She brought attention to the unseen broken chains at the feet of the Statue of Liberty.

Can you find How People are dealing with Cognitive Dissonance Today?