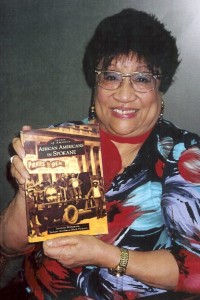 A Rich Heritage and Legacy

As the number of pioneers able to share the rich history of African Americans in Spokane dwindled through the years, Jerrelene Williamson asked herself a question, “Now, who will teach the children?”  Today, the 79-year-old has taken on that challenge.

Born March 23, 1932, in Chicago, Jerrelene nevertheless claims Spokane as her hometown.  Her father was born in Spokane in 1899, and she was a 2-year-old when he moved his family back here.  Jerrelene has been a resident of this city that she loves ever since.

She attended Hamilton Grade School on Spokane’s north side, and then graduated in Rogers High School’s Class of 1950. That same year she married Sam Williamson, owner of a Spokane janitorial service, and together they raised five children.  Today they also have 14 grandchildren and seven great-grandchildren.  For 27 years she worked as a grocery checker for Safeway Stores, the first black person in the area to be hired in that capacity.

She is retired but no less active.  “My main goal is to spread Spokane’s obscure Black History to the public,” she has said.  She has done that by schooling others — from local newspapers, museums, educational institutions and libraries — to the treasures that history holds.  You will find Jerrelene’s influence everywhere, including The Spokesman-Review, the Museum of Arts and Culture (MAC), the Spokane Public Library’s Northwest Room, Washington State University and even the Northwest African American Museum (NAAM) in Seattle.  Telling the stories of the African Americans who strived and thrived here against all odds is more than a goal; it is her passion.

As a result of her work, she was chosen as a Jefferson Award winner for community service by The Seattle Post-Intelligencer in 2003.  She also has received the Distinguished Alumni Award from her alma mater, Rogers High School, the Service of Excellence Award from African American students at Spokane Community College, and a Golden Pen Award from The Spokesman Review’s editorial department.  In addition, Jerrelene has been featured in the KSPS television documentary, “Remembering Spokane,” in numerous articles in The Spokesman Review, and in an oral documentary on “Spokane and the Civil Rights Movement” that was on the newspaper’s website and is now a permanent part of the library collection at Washington State University.

Gifted with a beautiful singing voice, Jerrelene has offered a ministry of song in the Spokane community, traveling to nursing homes, churches and organizations.  She uses her voice to bring peace, enjoyment and cheer to others.  She grew up singing in the church, and has been a choir member and soloist at Calvary Baptist Church and at Bethel A.M.E. Church.

But sharing the history of African Americans is her first love.  Thus, she felt a great sense of accomplishment in 2010 when she completed gathering photographs and writing copy for her book, “African Americans in Spokane.”  It was published by Arcadia Publishing for its Images of America series.  In addition to making the photographs available for display by community organizations and institutions, she enjoys making personal appearances to talk about and sign the book.  With its publication, she is satisfied that she has done her part to ensure that someone teaches the children about the rich heritage and legacy of African Americans in the Spokane community.