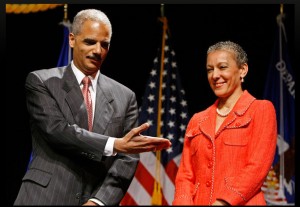 Eric Holder’s wife tells her story in PBS’ ‘Slavery by Another Name’. Dr. Sharon Malone speaks during the ‘Slavery By Another Name’ panel during the PBS portion of the 2012 Winter TCA Tour held at The Langham Huntington Hotel and Spa on Jan. 4, 2012 in Pasadena, Calif.

*Imagine this… You do some research into your family tree and discover that your uncle, who was born nearly 30 years after slavery ended in the U.S, was one of thousands of black men pulled back into a forced labor system in which they were arrested – largely on trumped up charges – and compelled to work without pay as prisoners. Imagine that this “convict leasing” system saw the groups of prisoners sold to private parties – like plantation owners or corporations – and that it was not only tolerated by both the North and South, but largely ignored by the U.S. Justice Department. Now, imagine that nearly a century after your uncle served 366 days in this penal labor system, you find yourself married to the head of the U.S. Justice Department, who, ironically, just so happens to be the first African American in the position.

Dr. Sharon Malone, wife of U.S. Attorney General Eric Holder, tells the heartbreaking story of her Uncle Henry in the upcoming 90-minute PBS documentary “Slavery by Another Name.” The film is based on the eye-opening book by Douglas A. Blackmon, which exposes a part of American history that most folks either had no clue existed, or didn’t know existed to the extent that it did. “I want people to understand that this is not something that’s divorced and separate, and this doesn’t have anything to do with them,” Dr. Malone told EURweb exclusively at the Television Critics Association press tour last week. “If you were a black person who grew up in the South, some way or the other – whether or not you were directly involved in the system as my uncle was – you knew somebody who was, or your daily lives were circumscribed by those circumstances.” “But more importantly,” she continues, “why I really want people to see this film is because this is American history. This isn’t just southern history, or African American history. It explains a lot of who we are as a people. It is a missing puzzle piece for what happened. You had the Civil War, you had reconstruction, gap, gap, gap, and then you’re at Martin Luther King. This fills in that gap.”

“Slavery by Another Name,” narrated by Laurence Fishburne and produced and directed by Sam Pollard, premieres Monday, Feb. 13, 2012 at 9 p.m. ET on PBS. Click on link below to watch the promo. Dr. Malone says she sensed that something was always on low boil with Uncle Henry. http://www.youtube.com/watch?feature=player_embedded&v=5s8ccKepCms <http://www.youtube.com/watch?feature=player_embedded&amp;v=5s8ccKepCms>  History has repeated itself with the rate of incarcerations of this century!!

Thanks, Yvor, for the heads up.   Slavery by Another Name is on the KSPS channel 7 schedule at 9 pm on February 13.