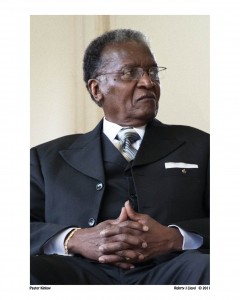 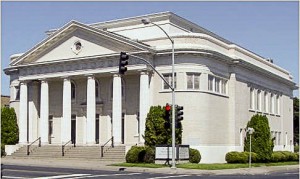 Change of Address Challenges Congregation to a New Outreach

A predominantly African-American congregation’s move from 312 E. Third to 806 W. Indiana represents more than a change of address. It expresses Holy Temple Church of God in Christ’s vision to reach out to the community and to model reconciliation. To Gladys Howard, chair of the board of trustees and member since 1959, the church is committed to welcoming everyone.

“The Bible says to love our neighbors.  Who are our neighbors?  Everyone is, not one color or ethnic group.  We have one God, so we should learn to get along with everybody,” Gladys said.  “We hope our church will be an example of friendliness across differences.”

“We are about breaking barriers,” he asserted. He sees God moving in Spokane to spread reconciliation among diverse people and to gather people to break through barriers that otherwise would divide.

The congregation moved on June 20 to the former Second Church of Christ, Scientist, which now meets at its reading room at 3915 N. Monroe.  They sold their former building to the Orchard Christian Fellowship.

The move has unleashed energy and a desire to fill the new space, which has seating for up to 600 people in the sanctuary and space downstairs for classes.

Holy Temple Church, founded in 1948, met ten years in a store front on Sherman where the freeway now is.  Then they moved into the Third Ave. location.

“We have been looking to move for some time,” said the Rev. Ezra Kinlow, the pastor, “seeking a facility to accommodate a complete ministry with space for children and family ministry.  We have 150 members and followers and continue to grow.”

Ten years ago, Holy Temple bought land but realized a new building would be too expensive, he said.  So they began looking for an existing structure.

While the new location has  space for family nights, choir practices, teen ministry and worship services Tuesday and Wednesday evenings, as well as Sunday mornings and evenings, it lacks one thing the former building had:  a kitchen.

“We like to cook and eat, so we’ll put in a kitchen,” Gladys said.
Most members commuted to the former church from Fairchild and all around Spokane.  The new building is closer for many.

Ezra, who is also district superintendent for Church of God in Christ churches in Yakima, Pasco and Walla Walla, knows that when people improve their situation, they may become more reserved.  Many in the church, like Ezra, come from farm country in Mississippi, Alabama or Arkansas and moved to cities to advance.

“We can be proud of the facility, but we do not want to lose our common touch.  We need to stay down-to-earth,” Ezra said.

“Coming to a building of this size calls for new commitments.  We are not affluent, and there will be new maintenance costs.”

Ezra hopes to use the building to reach out, by inviting religious speakers and Gospel singers from around the country and the world to expose the congregation and the city to ideas and music.

“Gospel music is my preference from my cultural background.  I want to expose others to it,” he said.  “The goal is to reach more people in the city with the Gospel message.  While some people may not come to hear a preacher, many will come to hear Gospel music, and the message will touch them.  I hope to bring a greater portion of Spokane to unite in covenant relationship with Jesus Christ.”

Ezra entered lay ministry in Tacoma, working with youth.  Holy Temple Church of God in Christ is his first congregation.

The son of a minister, he left Arkansas in the 1950s after high school.  He went to Los Angeles, which he found “too much for a country boy.”  So he moved to Tacoma, where he lived 17 years.

Ezra had no desire to follow his father but it seemed natural when he became serious about Christ.  Married in 1963, he entered ministry in 1972.
When he came to Spokane 23 years ago, the church had 15 members.
He attributes the church’s Pentecostal faith and his connections with Mission Spokane for the church’s vision beyond itself.

“The Church of God in Christ believes that biblical principles can be lived day to day in modern society,” Ezra said.  “It may be a struggle, but we believe in the full operation of gifts of the Spirit in today’s church, giving strength to the ministry Jesus did on earth.

“Jesus ministered to the whole body.  He fed the hungry, gave sight to the blind, restored hearing to the deaf and healed the lame,” he said. “Acts 2 says that, as the Spirit moved on the disciples, they were able to do these things, too.  We are able to do what Jesus did and more, as John 14:12 says.”

Ezra has seen it happen in others and experienced it himself.
IBM transferred him to Spokane at the same time the church called him as pastor.  After two years, he hurt his lower back and went on medical retirement.

“I couldn’t rest at night.  I went to doctor after doctor.  In a 1995 prayer meeting, God lifted the back pain that lim

Through Mission Spokane, Ezra began meeting with people from other churches in the city in the early 1990s. He felt the Spirit move him to a ministry of reconciliation and to be more evangelical in terms of both the evangelical gospel and the social gospel to help people in the community have better lives.

In 1996, as an outgrowth of Promisekeepers, Ezra met with many other pastors to plan Reconciliation Sunday in the Spokane Arena.  Out of it, pastors established weekly prayer meetings at Union Gospel Mission.
“It is great to come together in Christian community,” he said.

As president of Mission Spokane, which trains “servant leaders” to transform Spokane, Ezra said he has a visible role in the religious community that enhances his church’s ministry.

They organized some joint worship services and pulpit exchanges that introduced church members to people in different churches that use different types of worship.

“Cross-denominational acceptance shows how broad Jesus is.  Jesus is not dependent on one culture or denomination,” he said.

“We all preach Jesus Christ, but have different emphases to fit our flavors.  If we are left to our own thinking, we operate only in our own circles.

“Our church, which is a racially mixed congregation, likes lively, emotional worship,” he said, aware that style does not appeal to some Christians.  “I appreciate that the Gospel sets no boundaries, so we work on reconciliation through Mission Spokane and within our congregation.”