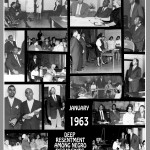 Generation 1, in my taxonomy, is the civil rights generation — the generation of those who participated in or simply bore witness to the defining 20th-century battle for racial equality. It is the generation (born in 1944 or before) that forced modern-day America to acknowledge that blacks are real human beings.

They ushered in a new age, fighting not only on the civil rights battlefield but also in law firms, corporations and segregated communities. But in breaking through the walls that Jim Crow had built, they got scars, deep and painful, which left many of them unwilling to fully trust in the kindness and goodwill of whites. ….(More)

Gen 2s (born between 1945 and 1969) did not, generally speaking, play a pivotal role in the civil rights movement. But they were, without question, the children of “the Dream.” They took Martin Luther King Jr.’s words to heart and pushed America to make them come true. Gen 2 “Dreamers” were the first and second waves of African Americans to pour into universities, corporations and other institutions that previously excluded them. And many ran into a wall of prejudice once they arrived. .….(More)

Gen 3s (born between 1970 and 1995) came of age in an era when Jim Crow was ancient history and explicit expressions of racism were universally condemned. Many of the more privileged were raised in predominantly white neighborhoods and, from the beginning, attended predominantly white schools.

Competing with other racial groups is nothing new to them. Their identifying characteristic is their fervent — if not totally universal — belief that they personally can overcome whatever obstacles prejudice might set in their way. They don’t believe that America is color-blind, race-neutral or “postracial.” They do believe, however, that the old racial limits no longer apply and that the old racial boxes cannot contain them. And some of them are a bit fed up with the attitudes and advice of their elders.  ….(More)

1 thought on “You Are Who You Were When”