Just saw the movie “Head Of State” on HBO. If you did see it, see it again. If you didn’t then see it now. After Obama’s first term in office you will see it with new eyes  and ideas.

Head of State is a 2003 comedy film directed, written by, and starring Chris Rock and also co-starring Bernie Mac. The film’s title refers to that function of the President of the United States, the other two functions being head of government and commander in chief. Mays Gilliam (Chris Rock) is an alderman of the 9th Ward in Washington D.C.. After being fired from his post and dumped by his girlfriend, Kim (Robin Givens), Mays is surprisingly chosen as the party candidate for the presidency. 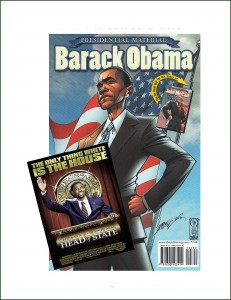 Some folks want President Obama to be Chris Rock the character Mays Gilliam. Others want him to be a Super Hero.

See what the real head of state accomplished in the first two years to get reinspired.

We voted for “CHANGE”, in the presidential election. The path to “CHANGE” is not smooth, or straight, and it is full of obstacles. Along the path there are picket lines and road blocks by those who do not want this journey to “CHANGE” to reach its destination.

The journey to “CHANGE” is long, and may not be completed in four years. Presently the convoy to “CHANGE” is slowly progressing forward, but it needs fresh oil, new tires and fill-ups, in the form of your vote for seats for “CHANGE” supporters.

Give “CHANGE” an energy boost….VOTE! VOTE FOR “CHANGE”