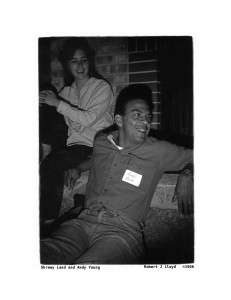 Andrew Jackson Young (born March 12, 1932) is an American politician, diplomat, activist and pastor from Georgia. He has served as Mayor of Atlanta, a Congressman from the 5th district, and United States Ambassador to the United Nations. He served as President of the National Council of Churches USA, was a member of the Southern Christian Leadership Conference (SCLC) during the 1960s Civil Rights Movement, and was a supporter and friend of Dr. Martin Luther King, Jr.

Since leaving political office in 1989, Young has founded or served in a large number of organizations founded on public policy, political lobbying and international relations, with a special focus on Africa

Andrew Young was born in New Orleans, Louisiana to Daisy Fuller Young, a school teacher, and Andrew Jackson Young, Sr., a dentist. Young’s father hired a professional boxer to teach Andrew and his brother how to fight, so they could defend themselves. From that, Young decided that violence was not the path he would choose to follow.

After beginning his higher education at Dillard University, Young transferred to Howard University in Washington, D.C. in 1947, and received his Bachelor of Science in pre-dentistry degree there in 1951. He originally had planned to follow his father’s career of dentistry, but then felt a religious calling. He entered the Turner-Boatright Christian ministry school and earned a Bachelor of Divinity degree from Hartford Seminary in Hartford, Connecticut, in 1955.

Young is a member of Alpha Phi Alpha fraternity.

Young was appointed to serve as pastor of a church in. It was there in Marion that he met Jean Childs, who later became his wife. Also while in Marion, Young began to study the writings of Mohandas Gandhi. Young became interested in Gandhi’s concept of non-violent resistance as a tactic for social change. He encouraged African-Americans to register to vote in Alabama, and sometimes faced death threats while doing so. He became a friend and ally of Dr. Martin Luther King, Jr., at this time.

Young also travelled to Geneva for meetings of the World Council of Churches around the United States.

However, as the Civil Rights Movement gained momentum, Young decided that his place was back in the South. He and Jean moved to Atlanta, Georgia in 1961, and again worked on drives to register black voters. In 1960 he joined the Southern Christian Leadership Conference. Young was jailed for his participation in civil rights demonstrations, both in Selma, Alabama, and in St. Augustine, Florida. Young played a key role in the events in Birmingham, Alabama, serving as a mediator between the white and black communities. In 1964 Young was named executive director of the Southern Christian Leadership Conference (SCLC), becoming, in that capacity, one of Dr. King’s principal lieutenants. As a colleague and friend to Martin Luther King Jr. he was a strategist and negotiator during the Civil Rights Campaigns in Birmingham (1963), St. Augustine (1964), Selma (1965), and Atlanta (1966) that resulted in the passage of the Civil Rights Act and Voting Rights Act. He was with King in Memphis, Tennessee, when King was assassinated in 1968.

In 1970 Andrew Young ran as a Democrat for Congress from Georgia, but was unsuccessful. After his defeat, Rev. Fred C. Bennette, Jr., introduced him to Murray M. Silver, Esq., Atlanta, Georgia, Attorney, who served as his campaign finance chairman, promoted concerts featuring top entertainers including Harry Belafonte and Bill Withers. He ran again in 1972 and won. He later was re-elected in 1974 and in 1976. During his four-plus years in Congress he was a member of the Congressional Black Caucus, and he was involved in several debates regarding foreign relations including the decision to stop supporting the Portuguese attempts to hold on to their colonies in southern Africa. Young also sat on the powerful Rules committee and the Banking and Urban Development committee. Young opposed the Vietnam War,[2] helped enact legislation that established a U.S. Institute for peace, established the Chattahoochee River National Park and negotiated federal funds for MARTA and the Atlanta Highways.

In 1977, President Jimmy Carter appointed Young to serve as the United States Ambassador to the United Nations (Young was replaced in Congress by Wyche Fowler after a special election). Young became the first African-American to serve in the position. Young’s controversial statements made headlines almost from the start.  In August 1979, he appeared on the television show and said that Israel was “stubborn and intransigent.

Young’s UN ambassadorship ended in August 1979, after Young met secretly, apparently in violation of American policy, with representatives of the Palestine Liberation Organization. Jimmy Carter denied any complicity in what was called the “Andy Young Affair”, and asked Young to resign. Asked about the incident by Time soon afterward, Young stated, “”It is very difficult to do the things that I think are in the interest of the country and maintain the standards of protocol and diplomacy… I really don’t feel a bit sorry for anything that I have done.

Young spent the next two years as a private citizen, as head of his consulting firm, “Young Ideas”.

In 1981, after being urged by a number of people, including Coretta Scott King, the widow of Martin Luther King Jr., Young ran for mayor of Atlanta. He was elected later that year with 55% of the vote, succeeding Maynard Jackson. As mayor of Atlanta, he brought in $70 billion of new private investment.He continued and expanded Maynard Jackson’s programs for including minority and female-owned businesses in all city contracts. The Mayor’s Task Force on Education established the Dream Jamboree College Fair that tripled the college scholarships given to Atlanta public school graduates. In 1985, he was involved in privatizing the Atlanta Zoo, which was renamed Zoo Atlanta. The then-moribund zoo was overhauled, making ecological habitats specific to different animals.

Young was re-elected as Mayor in 1985 with more than 80% of the vote. Atlanta hosted the 1988 Democratic National Convention during Young’s tenure. He was prohibited by term limits from running for a third term.

Young ran unsuccessfully for Governor of Georgia in 1990, losing in the Democratic primary run-off to future Governor Zell Miller. However, while running for the Statehouse, he simultaneously was serving as a co-chairman of a committee which, at the time, was attempting to bring the 1996 Summer Olympics to Atlanta. Young played a significant role in the success of Atlanta’s bid to host the Summer Games.

In October 1994, then-U.S. president Bill Clinton, along with then-president of South Africa Nelson Mandela, established the Southern Africa Enterprise Development Fund (SAEDF), and named Young as its Chairman. The fund was established to provide funding to help small- and medium-size indigenous businesses throughout southern Africa.

In 1996, Young wrote A Way Out of No Way: The Spiritual Memoirs of Andrew Young, published by Thomas Nelson.

In 1996, Young and Carlton Masters co-founded GoodWorks International, a consulting firm “offering international market access and political risk analysis in key emerging markets within Africa and the Caribbean.” The company’s Web site also notes that “GWI principals have backgrounds in human rights and public service. The concept of enhancing the greater good is intrinsic to our business endeavors.” Nike is one of GoodWorks’ most visible corporate clients. In the late 1990s, at the height of controversy over the company’s labor practices, Young led a delegation to report on Nike operations in . Anti- activists derided the report as a whitewash and raised concerns that Nike was trading on Young’s background as a civil-rights activist to improve Nike’s corporate image.

Young also has been a director of the Drum Major Institute for Public Policy, and also is the chairman of the board for the Global Initiative for the Advancement of Nutritional Therapy.

From 2000 to 2001, Young served as president of the National Council of Churches.

In 2003, Young founded the Andrew Young Foundation, an organization meant to support and promote education, health, leadership and human rights in the United States, Africa and the Caribbean.

In 2004 Young briefly considered running for U.S. Senate from Georgia after the incumbent, Zell Miller, announced his retirement, but decided not to re-enter public life.

In 2005, to honor the 40th anniversary of the Voting Rights Act of 1965, Young, William Wachtel and Norman Ornstein founded Why Tuesday?, a nonpartisan group dedicated to increasing voter participation by moving the national voting day from Tuesday to the weekend.

From February to August 2006, Young served as the public spokesman for Working Families for Wal-Mart, an advocacy group for the retail chain Wal-Mart.[11] Young resigned from the position soon after a controversial interview with the Los Angeles Sentinel, in which, when asked about Wal-Mart hurting independent businesses, he replied, “You see those are the people who have been overcharging us, and they sold out and moved to Florida. I think they’ve ripped off our communities enough. First it was Jews, then it was Koreans and now it’s Arabs.”[12]

In 2007, the Andrew Young Foundation produced the documentary film Rwanda Rising, about Rwanda’s progress since the Rwandan genocide of 1994. Young also served as the film’s narrator. Rwanda Rising premiered as the opening night selection at the Pan African Film Festival in Los Angeles in 2007.

On January 22, 2008, Young appeared as a guest on the television show The Colbert Report. Host Stephen Colbert invited Young to appear during the writer’s strike, because, many years earlier, Young and Colbert’s father had worked together, but on opposite sides, to mediate a Charleston, South Carolina, hospital workers’ strike.

Young made another appearance on The Colbert Report on November 5, 2008, to talk about the election of Barack Obama to the presidency.

Young had four children with his first wife, Jean Childs, who died of cancer in 1994. He married his second wife, Carolyn McClain, in 1995.

Young himself was diagnosed with prostate cancer in September 1999, which was successfully removed with surgery in January 2000.