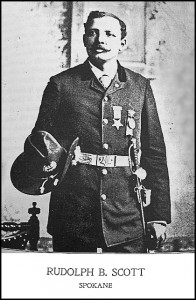 Rudolph Bowman Scott is the best known and most prominent of the Black Pioneers who settled in the Inland Northwest in the 1880s. Born free on November 16, 1846 to Henry E. and Adeline Way Scott in New Haven, Connecticut, Rudolph was an American of African, Indian and Scottish ancestry.

Rudolph attended the Lancasterian School of New Haven where he learned wood carving in Chancey Jerome’s clock manufacturing company. He became interested in politics at a very young age. Rudolph was only 13 years old in 1859 when he carried a torch in a procession where Abraham Lincoln was speaking in New Haven. He took up the cause of the Union and enlisted in the Navy in 1861 for service in the Civil War. Rudolph was in the North Atlantic Squadron on board the United States Chicopee gunboat and accompanied Lieutenant Cushing when the Albemarle was destroyed. He was severely wounded in Plymouth, North Carolina.

After the war, Scott was engaged in mining in Colorado, New Mexico, Washington and Coeur d’Alene. He came to Spokane in 1883 and established one of Spokane’s first fire and life insurance companies which was able to pay all claims that occurred during the Spokane fire of 1889. Mr. Scott was the manager of Pequot Mining and Milling Company and was active in the business community until the start of the Spanish American War. He enlisted at Seattle on April 25, 1898 as a private of Company B, First Washington Veteran Artillery and was discharged at the end of the war with rank of first lieutenant.

In addition to the Grand Army of the Republic, Mr. Scott was prominent in various fraternal organizations. He attained the thirty-three degree of Scottish Rite in Masonry and was the deputy supreme chief to Oronhyateka, the Mohawk Indian, who is the supreme chief of the Independent Order of Foresters from 1897-1899. He was also a personal friend to Chief Joseph, the Indian chief of the Nez Perce tribe, accompanying him and other chiefs to Washington to present their cause before the Indian Commission and the President. Mr. Scott was also the major general of the northwest of the Union Veterans Union.

Rudolph B. Scott was appointed United States Chinese Inspector from 1902-1906 in and about the city with headquarters in Spokane. He was the first black man to hold a federal position in the Northwest. He resigned in 1906 due to health problems and died on March 23, 1909. 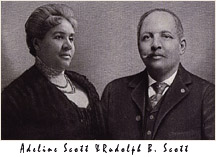 Mr. Scott was survived by widow, Adele A. Wagner Scott and three children: Rudolph Jr., Henry and Adeline Scott.  Rudolph B. Scott married Adele Wagner, daughter of H.O. and Susan(Lyons)Wagner on September 4, 1883 in Denver, Colorado. During anti-slavery days, her father served as an operator of the Underground Railroad.

Mrs. Scott was active in the Woman’s Relief Corps and was the patriotic instructor for the department of Washington and Alaska. She also worked in the Independent Order of Foresters and was the first vice chief ranger in the companion court in state of Washington where she also served as a financial advisor and department inspector in 1904 and 1905.

Pat Bayonne-Johnson is photographed here visiting the gravesite of a Spokane Black pioneer – Rudolph Bowman Scott. He and his wife are buried at Fairmont Memorial Park. Read her article about all of this man’s accomplishments beginning with serving with the Union Army in the Civil War and including being the first Black man to hold a federal position in the northwest.

Pat is 4comculture’s in-house historian. She works with the Eastern Washington Genealogical Society and serves at the Spokane Public Library downtown on Saturdays helping people find their roots. .