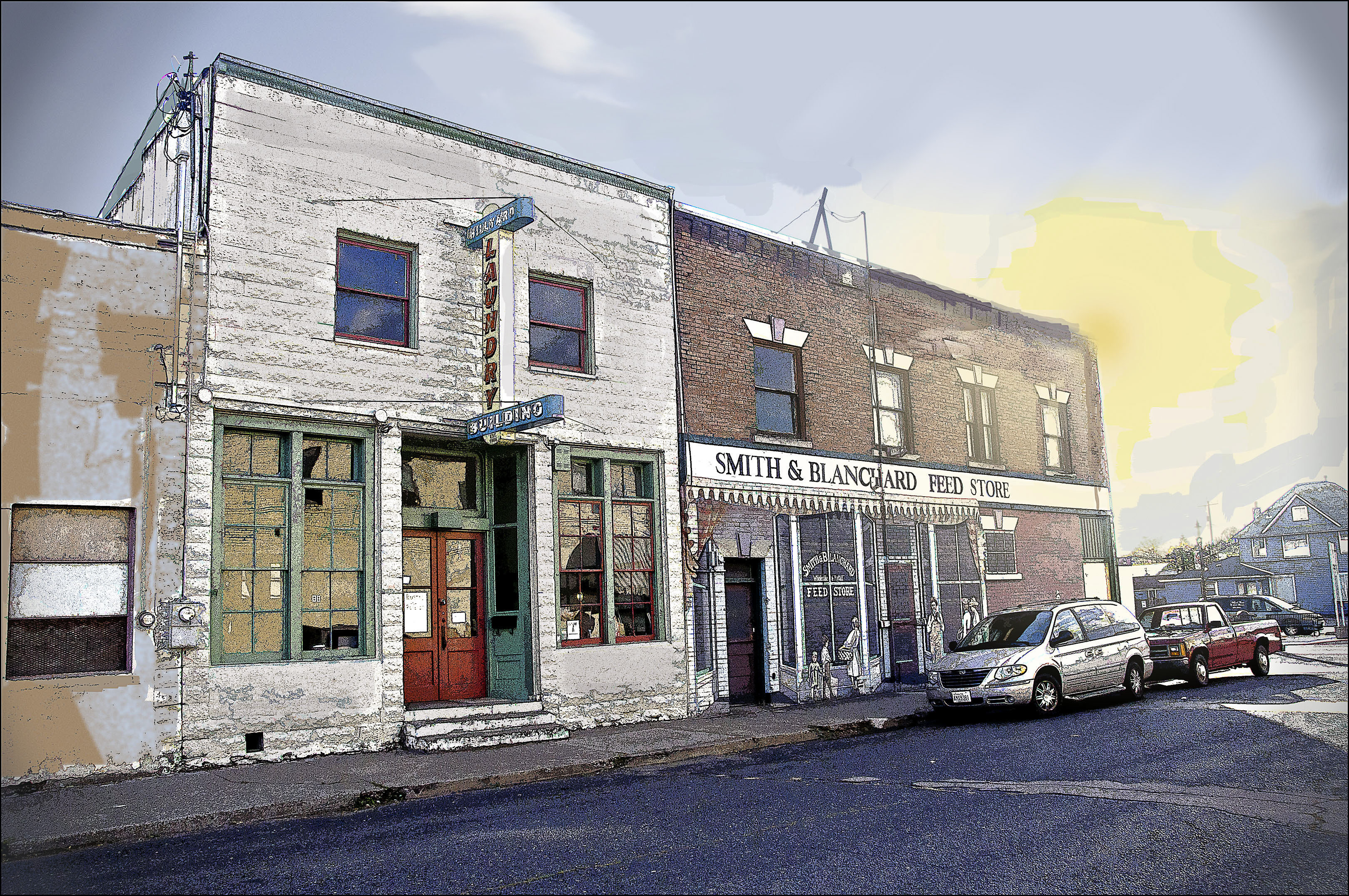 The Kisaburo Shiosaki laundry was located here at 3108 E. Olympic in the early 20th century. 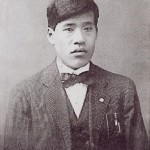 Railroad and mine companies in the West had a severe shortage of laborers in the 1880s and 1890s so they reached across the Pacific to Japan to solve their problem. Thousands of healthy, strong, young Japanese laborers were recruited.  Kisaburo Shiosaki was one of the laborers who came to America and eventually ended up in Spokane.

Born August 9, 1883 in Kakegawa, Shizuoka, Japan, Kisaburo Shiosaki was a third son with no hope of ever inheriting a piece of the family’s tenant farm. According to the Japanese inheritance system, all the land is given to the eldest son.  The other sons had to find other ways to work. So when the recruiters came around in 1904, Kisaburo signed up with the Oriental Trading Company of Seattle, a leading supplier of Japanese railroad labor and landed in Vancouver B. C.

Kisaburo and other young men from the Japanese countryside were immediately put on a train headed inland. He worked for a short time with the Canadian Pacific Railroad, laying tracks in Canada. He sneaked into Troy, Montana where he connected with the Kuwahara family that was also from his home town in Japan. The Kuwahara family had a restaurant which fed the workers from the Great Northern Railroad.  Mr. Kuwahara helped Kisaburo find work. This probably lead to a job in Spokane. 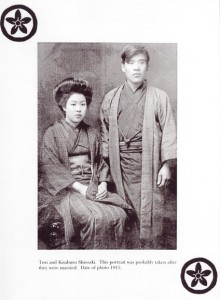 Kisaburo worked many odd jobs including that of a short order cook. He got a job at the Davenport Hotel as a bus boy. With steady employment, Kisaburo saved his money, got a job guarantee from the hotel, bought a round-trip ticket and went to Japan to look for a wife in 1915.

Kisaburo was 29 approaching 30 years old when he met and married Tori Iwaii, a girl about ten years younger, who lived in the same city but a different township.  Kisaburo returned to America alone and Tori stayed with her in-laws. Tori had a rough time living with the in-laws, especially with her mother-in-law whose duty was to whip the new bride into shape.

It took Kisaburo about a year to save enough money to send for Tori.  They moved to Hillyard and together they had five children – George, Blanche, Roy, Fred and Floyd.  Kisaburo went into business with two other men in a hand laundry located at 3108 E Olympic Avenue in Hillyard.  Kisaburo bought out his partners one at a time and the family moved into a small apartment above the laundry. 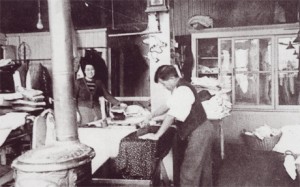 Because of the laundry business, the Shiosakis were well known in their community. Kisaburo was known as “Kay” and Tori was “Mrs. Kay.” The laundry was a hand laundry but it did have some washing machines. Tori also worked in the laundry but a number of other people were hired because everything was ironed by hand including sheets.  Although Kay was never taught mechanics, he was good with machines. He added machines piece by piece and kept them in good working order.

All of the children went to Regal School and then to John R. Rogers High School. The Shiosakis did not always participate in the Japanese community because the children had to go to Japanese language school on Saturdays and during summer vacations. They did not attend a Japanese church but instead visited the Protestant churches around Hillyard when they felt like it.

There were as many as 1000 first generation Japanese immigrants (Issei) and second generation Japanese Americans (Nisei) living in Spokane around the early 1900s but the population declined to less than 400 by 1935. After the passing of the Alien Land Law in 1921 in Washington State which restricted property ownership to “aliens ineligible in citizenship” many Japanese returned to Japan.  Asians were the only immigrants ineligible to become naturalized U.S. citizens. Then the Immigration Act of 1924, also known as the Johnson-Reid Act, was passed and it barred the Japanese from immigrating.

When Japan bombed Pearl Harbor on December 7, 1941, the Shiosakis and all Japanese Americans, citizens or enemy aliens, experienced difficult times. White customers refused to patronize the Shiosaki’s laundry and other Japanese businesses. A few Issei leaders were detained and the Japanese were barred from approaching sensitive areas such as airfields, water, telephone and electric power companies. There were also curfews and the FBI had to be notified if they traveled more than ten miles out of the city.

On February 19, 1942 President Franklin D. Roosevelt authorized the Executive Order 9066 which designated so-called “military zones” as “exclusion zones” from which any or all persons may be excluded.  This order allowed the government to exclude all people of Japanese ancestry from the entire Pacific coast, including all of California, much of Oregon, Washington and Arizona. One hundred and twenty thousand people of Japanese heritage living on the Pacific Coast of the United States were interned in “War Relocation Camps.” Spokane was not part of the evacuation so hundreds of people from Western Washington and other places on the West Coast began arriving to avoid being sent to the internment camps. Spokane’s Japanese community tripled its population with the influx of people from the coast.

Business at the Shiosaki’s laundry picked up a few weeks after the start of the war. Hillyard was a major working terminal for the Great Northern Railroad. There was a round house, a car shop, and an ice house; box cars and railroad ties were made and steam engines were repaired. This kind of labor produced a lot of dirty, greasy clothes that only Kay could handle as many other laundries weren’t equipped to do it.

Most male U.S. citizens and male immigrant non-citizens between the ages of 18 and 25 years were required by law to register within 30 days of their 18th birthday. But when the Shiosaki’s son, Fred, tried to register for the draft, he discovered that he was classified 4C by the draft boards for “enemy alien.” He was not an enemy nor an alien but an American-born citizen. When the U.S. Army formed an all Japanese unit to serve in Europe, Fred joined the 442nd Regimental Combat Team and his unit is known for the rescue of the famous Lost Battalion near Strasburg in 1944. The 442nd Regimental Combat Team is considered to be the most decorated infantry regiment in the history of the United States Army. They were awarded eight Presidential Unit Citation and twenty-one of their members were awarded the Medal of Honor for WWII. The unit was nicknamed the “Purple Heart Battalion” due to their record-setting decoration count. The 422nd Regimental Combat Team motto was “Go for Broke.”

After the war ended in 1945, many Japanese families returned to their homes on the West coast but a significant number stayed in Spokane. Many lost everything and many returning soldiers found it difficult to find work due to the anti-Japanese resentment. Fred Shiosaki was one of those soldiers who decided to go to school when he couldn’t find work. In an interview with Fred Shiosaki, he stated that one of the good things to come out of the war was his father’s eligibility to become a citizen. Kisaburo Shiosaki became a naturalized American citizen on May 27, 1953.

Kisaburo was a resident of Spokane for 50 years and died on October 14, 1958. He was survived by his wife Tori and the children. Tori passed away on May 15, 1977. Mr. & Mrs. Shiosaki are buried in the Japanese section of Greenwood Cemetery.

NOTE:  The story of Kisaburo Shiosaki was presented at the 4th Annual Walking with Ancestors,  “Remembering the Iron Horse Era in Spokane” program at Greenwood Memorial Cemetery on September 21, 2013.