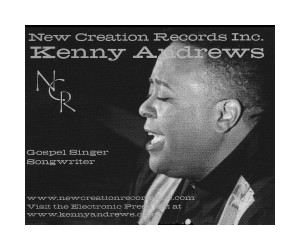 Gospel Singer, Songwriter, Kenny Andrews was born July 3, 1962 to Reverend Dr. Andrews and First Lady Doris Andrews.  With the influence of his father, who sang with the Golden Echoes, Kenny began singing at the early age of four.  Kenny has always conveyed his emotions and his commitment to God through his music.

In 2005, Kenny was the grand prize winner of Washington State KHQ-Northern Quest Casino Gimme the Mike.

In 2006, Kenny provided inspiration to the secular arena as Kenny Andrews & Resurrection.

In the fall of September 2007, while performing a secular concert Kenny was filled with the Holy Spirit who spoke to him to glorify God by deeply rooting himself to his ministry, Gospel music.  Kenny collaborated with Manager Judy Smith and Chester Andrews of Mutek Production, to create a new record company that would be called New Creation Records.

Through New Creation Records Kenny continues to spread his inspirational message while touring in music venues and churches throughout the country.  Most notable are his Spotlights in  Gospel USA Magazine issues; June 2010, April 2011, and on the front cover of June/July 2011 issue, debuting his new album, New Creature, and his So Amazing video.

The power of his Traditional and Contemporary mix speaks to us through his singles,
Real Special Love, He Reigns, and So Amazing, awaking our spirit with each breath to glorify God.