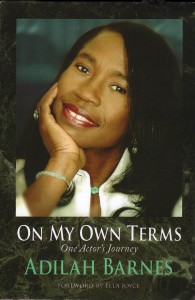 Adilah Barnes performance in the one woman show I Am That I Am: Woman, Black at Whitworth University on October 26 was an evening of inspiring theater. The choice of women portrayed (from Sojourner Truth forward to Angela Davis and May Angelou), the interesting and meaningful selection of their words woven together with song in a dark theater was moving. As the excellent questions from students, faculty and community members revealed something of Ms. Barnes life and spirit and because some of her life path seemed to parallel my own I decided to buy her book so I could find out more.  We talked a little as she signed the book and indeed we had both been college students in the San Francisco Bay area in the late 60’s and early 70’s – that great time of change.

I graduated from Stanford in 1968, the year she started at Santa Cruz. During college I was picketing liquor stores that sold Gallo wine, visiting the Delano grape fields and having the opportunity to sit in Cesar Chavez’s living room, and to study non-violence in Chicago where I met my African American husband who was an organizer and office manager for CORE and documenting the Movement as a photographer. Adilah was performing Black, experimental and guerilla theater, visiting Huey Newton in Oakland, experiencing white backlash against Black Nationalism and spending a year in Mississippi while she was in college in Santa Cruz. But as I opened her book and read about her origins I realized we had even more in common – we are both from Oroville, California. I was born there in 1946 and though by the time I was 4 my parents had moved to the Bay Area (Alameda), all my relatives were in Oroville and Chico and I spent holidays and many wonderful times in the summer there with my grandparents, aunts, uncles and cousins. Oroville, at the foot of the Sierra Nevada mountains northeast of Sacramento, is indeed just as Ms. Barnes describes it in her book – a small Southern town set down in Northern California.

My mother was the daughter of a logger who gave up working in the woods to work at Vaughn’s Feed store so she could go to school in town. They lived in a little house off Long Bar Road in an area my cousin the real estate agent refers to as Tobacco Road. My grandmother was about 10 years older than Adilah’s mother and I thought of her so often as she described her mother’s cooking and country wisdom and good cheer. My sister and I loved sleeping on the screened porch of the house my grandparents had built in about 1920 as a young couple. My mother was born in it and grew up there – no indoor plumbing until she was 18.

My parents and their siblings all graduated from Oroville High School as did my cousins. Ms. Barnes must have been there at the same time as my youngest cousins. However in all my visits and vacation stays I had absolutely no idea that there was a Black community there, that busing had integrated Bird Street School, and there had been protests for job equality – in both of which Adilah took part. No one discussed such issues, nor did we ever interact with anyone of color.

As I grew older I realized that while I loved visiting Oroville and my family the area was very conservative and parochial. An uncle wouldn’t let his kids go to that communist UC Berkeley and I learned many years later that when he heard about my African American husband he said he would never let him cross his doorstep – though in fact we later did visit my uncle and he was perfectly polite. It was with trepidation that I made my first visit to my mother’s parents with Bob. They were very welcoming, but……  Grandpa said “I knew a Black guy once” and proceeded to tell a story about him. Grandma described working summers in the cannery -”worked hard as a nigger ….pause ……hard as a dog”! They also proudly dug out Mom’s first doll – a Blackface cloth doll named Rastus. Bob took it all very well but we did not spend much time there.

I also enjoyed reading about Adilah Barnes’ Bay Area Theater days with the prestigious American Conservatory Theater. Bob’s cousin’s daughter Taya lived in Palo Alto and attended ACT workshops every summer. She went to Berkeley in theater, moved to San Francisco and did drama “therapy” with at risk kids. So I know what kind of an impact that organization had in the area. I wonder if she ever had Adilah as a teacher?

My Oroville heritage has sometimes been a burden – at Stanford surrounded by well-dressed girls who had been to Europe, and as a very white, narrow background for the wife and mother of African Americans.  And while the Bay Area is quite diverse, Alameda was very segregated, especially the schools. But I, like Adilah, treasure those country experiences such as a summer in Feather Falls and visiting backwoods bars with my grandparents. It gave me a broader experience – and certainly was useful when I became the distance librarian serving northeastern Washington small town folk.

I am sure the Oroville Black community must be very proud of their daughter Adilah (Lovey) Barnes. The community is working on becoming more visible. Dr. John Rivers, who a cousin Carol remembers as a star student, athlete, and officer at Oroville High when she was there as a freshman, has founded the South Oroville African American Historical Society. They have a newsletter and a very nice website:
www.soaahs.com

2 thoughts on “Adilah Barnes: On My Own Terms – One Actor’s Journey”