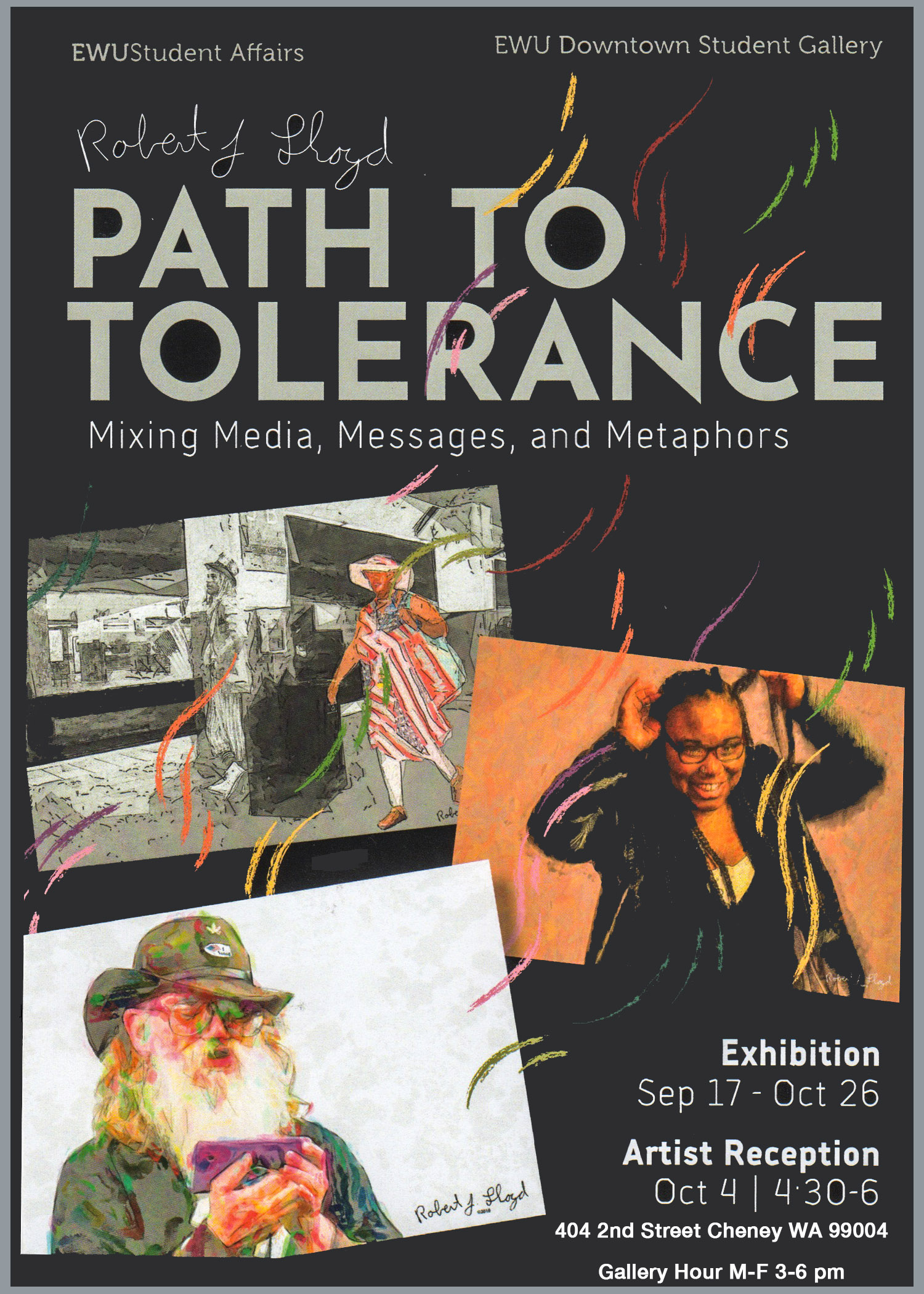 “A Path To Tolerance”, selections from over a decade of quiet observations, will be on exhibit at the EWU Downtown Gallery in Cheney Washington. It includes the exhibit “If You Really Knew Me”.

Below is a review of “If You Really Knew Me” by Jeff Mooring.

I am seldom moved enough to feel compelled to write about art. Somewhere in my head it’s the equivalent of trying to tell someone about a great song, instead of just playing it for them or droning on and on about a game that happened days ago. But compelled I am. The art in this case is the exceptionally well-conceived and executed work of a longtime friend Mr. Robert Lloyd.

Let me start by saying it’s one thing to capture the beauty and energy of a subject which he’s done, but Mr. Lloyd has surpassed that with his vivid, brilliantly colored, larger than life portraits of several women. His subjects, these eye-catching women, are of varying races, ages and stations in life. It’s my understanding that Robert achieved this dazzling effect with some high-tech, modern day alchemy of photography and computer technology. The details of which are far beyond my pay grade and simply don’t matter much when standing in front of these works. But imagine if you would, you stand being transfixed by each portrait and then you’re made aware, as they say in the TV infomercials, “but wait there’s more”. With a quick and easy loading of an app called “Cherry Pix” you can simply aim your phone at a portrait and the image comes to life and you get to hear the story of triumph behind each and every one of these beautiful souls.

The technology I believe is called augmented reality. The film clips were captured, edited and packaged by a local team at Community Minded TV and this collaboration was backed by an entity called The Alliance for Media Arts + Culture. It all comes together seamlessly due to exceptional talents and craftsmanship to be one of the most moving experiences in art that I’ve seen in my 30 some odd years of viewing.

The show titled “If You Really Knew Me” is on exhibit at the East Central Community Center, 500 S. Stone, with plans to travel. Do yourself a favor and make some, take some time… to see this exceptional effort with stories and images that are moving and interconnected in ways that I won’t spoil for you. It costs nothing to enter and may well give you an experience of relating to the lives of these beautiful women that you won’t soon forget, and you’ll feel compelled to tell others about, as have I. If You Really Knew Me by Robert Lloyd
Jeff Mooring